So tired, tired of waiting...

I realized the other day that a whole lot of my life has been spent waiting. Waiting to gain confidence. Waiting on a better choice. Waiting to become something or someone I'm never going to be.

I should probably be ashamed to admit that. I'm not.

I've always been big. Much bigger than my sisters. Much taller, much wider, much bigger hair. Even bigger feet. I'm big. I'm a lot. I get this.

It seems like a lame reason to have so much self-doubt, but I can honestly tell you that it held me back from a lot of things for a very long time. So much of my self worth was tied up in what that number on the scale said or what size jeans I had on. I heard it all, including the absolutely horrible "you have such a pretty face". I heard the whispers behind my back.

I tried it all too. I can't even count all the diets, all the exercise videos, the amount of money I spent on the gym. I made progress...and then promptly beat myself up because it wasn't enough. It was never enough. I remember crying to Jason that the girl who started the gym at the exact same time and had the exact same workout schedule as me had lost fifty pounds. I'd lost fifteen. AND she was at the gym that day EATING TACO BELL. WHILE I WAS ON THE ELLIPTICAL SWEATING MY OVARY OFF. Life seemed horribly, horribly unfair and I convinced myself it was all my fault. That if I just worked harder or ate less or had stepped it up just a little more that I could be better.

I was still waiting.

As I've mentioned previously, my wedding pretty much completely sucked. As I've also mentioned, I was mostly in it for the husband, so the actual suckage of the wedding didn't bother me as much as it might have bothered say, someone who would appear on the program Bridezillas. I wanted the wedding to be nice, but I wanted the marriage to be nicer, so although the wedding was a disappointment it didn't ruin my life or anything.

Jason first brought up a vow renewal when we'd been married like three years. Seriously. We've been throwing this idea around for a very long time. We seriously considered it four our fifth anniversary, but time, finances, and, if I'm being totally honest, probably the way I looked were all reasons we said we'd just wait. There'd be a better time. I was waiting again.

On our ninth anniversary we decided that for number ten we'd do something big. We've honestly never had a trip for just the two of us, except for the few days we went to Williamsburg for our honeymoon and the one night we spent at Bitlmore, so this was a Very Big Deal, one that we'd have to save up for and take time off work for.  Jason said there surely must be wedding chapels there and maybe we could go ahead and renew our vows, just the two of us. I agreed and mentally noted in my head exactly how much weight I'd need to lose every month for the next year to look just perfect on that special day.

It didn't happen. I booked the chapel back in January and told myself that I had so many  more days to make it all happen.

I dutifully tracked my weight and all my food. I pounded the pavement and wore out two pair of sneakers. I said no to delicious cake more times than I wanted to. I knew if I just kept waiting then everything would eventually fall into place and I'd be beautiful. I'd be worthy.

I weigh about 12 pounds less than I did on our ninth anniversary. That's about fifty or so pounds more than I wanted to weigh on our tenth. It's a lot less than I weighed on our wedding day, true. Still, it's not where I wanted to be.

The chapel where we said "I do" again was a beautiful little structure attached to a glorious and very old Episcopalian church. It was just the two of us, plus the officiant, the wedding coordinator and her husband, who was the music coordinator. The wedding coordinator was going to take pictures for us, and frankly? I didn't have very high hopes. I don't have a lot of good pictures from our wedding day, and I thought maybe if I could just get one or two decent shots from the renewal I would be fine with that.

A week and a day after our anniversary a disk arrived in the mail. I don't know how it happened, but I looked at those pictures and I thought, for the first time probably ever in my entire life,

That lady is beautiful.


That is me, and I am beautiful. 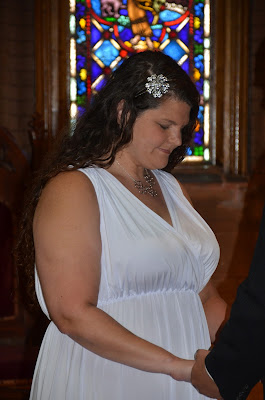 Did I look perfect? No. Was I as skinny as I wanted to be? No. Did I look like a woman who was happy, relaxed, and in love with the guy standing next to her? 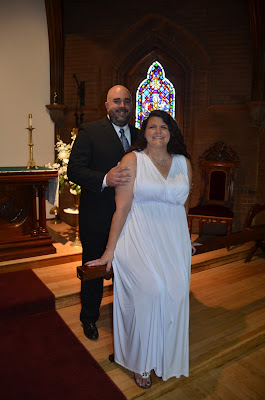 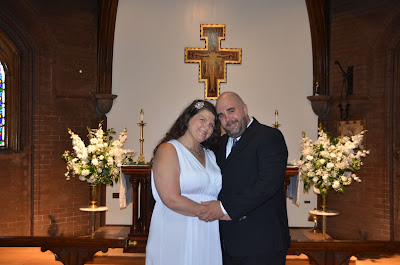 Is that woman beautiful? 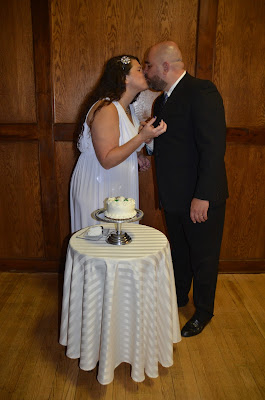 I'll still take my walks, I'll still track my food, and I'll still say no to things when I might want to say yes. I won't be perfect...I never have been. There will be days of insecurity and times I beat myself up.  I'll keep trying though, keep climbing on.

I have always thought you were beautiful. Your heart, your compassion, your friendship, your love.

YES! You are so beautiful. And I love that dress. Gorgeous. And your hair. I'm so happy for you. And happy 10th.

I agree -- That woman is beautiful both inside and out!!!

I'm glad you finally caught up with the rest of us who KNOW you're beautiful. Inside and out!

But seriously? The waiting thing. The wanting. The frustration. All of that. I could write half a day about all of it. No amusement parks until.....No more nights out unless.....No wearing a sleeveless dress, no shows where the seats aren't comfy, no swimming......

I can't wait until I can stop waiting too.

Crystal from My Ramblings said...

You are beautiful!
I hope I can get to this point sometime, soon!

You absolutely beautiful - inside and out. The renewal sounds lovely! And I love the pics :-)

You are beautiful and you looked really beautiful!

I love your blog. Thank you for sharing a little slice of your life.

You ARE beautiful... Don't wait, just live. Living allows for a cookie now and again. Really... Have I told you my weight story? I get this. I so, so, so could write this- only I wouldn't be down the 12 lbs because it's impossible to lose weight. BUT I am trying to see myself as beautiful.

I loved this so much that I sent it on to The Eleanor Project. You are an inspiration.