My husband is always watching this show called Ancient Aliens. Generally when he's watching something on television I use that opportunity to pin everything I want for Christmas onto various Pinterest boards. He has his hobbies, I have mine. It's fine.

I've seen enough of this particular program to know there is a guy with really crazy hair that frequently appears and no matter what the topic he definitively states that it was because of aliens. I have no idea what his background is, no idea what his qualifications are, really absolutely nothing about him except that he has crazy hair. Behold: 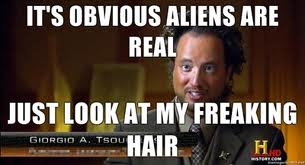 (FYI, there are like a million memes about this guy. Most are extremely hilarious but Jesus would unlikely approve if I posted most of them here on this blog. He was totally on board with me laughing at them though)

My son, naturally, finds this guy extremely hilarious and frequently responds, "ALIENS!" to anything unexplained around the house (Example: Me: "Why would the builder put a towel bar in my shower?" Him: "ALIENS!").

Last night after his shower he came into the bonus room. His hair looked just like this. I'm not even sure how he did it.

"Let me give you five good reasons that I'm still single," he said in a near flawless imitation of Crazy Hair Man's voice. "Number one, I live with my mom. Number two, ALIENS."


I'm pretty sure they were hilarious though.

Seriously.
Convince those kids of yours that they need to go to Kennesaw State University, which is 15 minutes from my house, so that crazy blogging lady Heather can feed them from time to time and experience a little of this maniacal joy. Because... ALIENS!