So I don't follow Weight Watchers anymore, even though I did like it for a long time. Quite a few of the pounds I lost were due to following the principal of counting points. Then I got lazy and weird about it, honestly. I didn't care about the quality of food I was putting in my mouth, I only cared if it added up to some arbitrary number that someone else told me was allowed. It was strange. I once figured out I was eating something like 500 calories a day in fruit. Fruit is good, hurray! But 500 calories of it? Because it was a "free" food and I felt like I could eat as much of it as I wanted? Um, no. That's messed up. I didn't even "want" it, you know? It was just I was "allowed" it.

On The Facebook I'm in a bunch of various weight-loss groups. I don't participate much but I read everything that comes across my feed. Depending on what type of mood Facebook is in on any given day, that can be not very much or a whole lot.

Every group is different, yet every group is similar. Because they are comprised of people and people are different. Just like everyone else.

So I've been really good this week and no cheats and I got on the scale this morning and I only lost 10lbs. I'm so disappointed and frustrated. Anyone know what I did wrong?

I've been on this journey for two months and I'm FINALLY down 50lbs! It took forever!

To which I really want to reply: 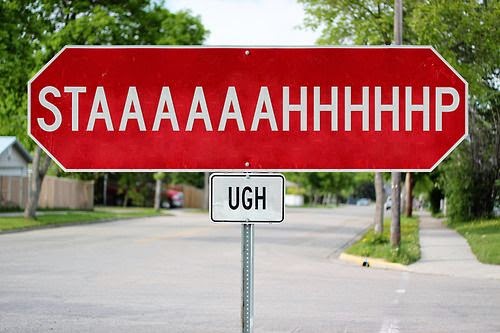 Inevitably, the next week they "gain" back two or three pounds even though they did every! single! thing! right! (because at least a few of the first ten were just water weight) and then they are frustrated and post about that too. And I'm sitting over here like, "YOU ARE STILL EIGHT POUNDS LESS THAN YOU WERE TWO WEEKS AGO. I STALLED FOR EIGHTEEN MONTHS ONCE. OMG, I WANT TO PUNCH YOU IN THE NECK."

I'm not usually this cranky, but seriously? Ugh.

I need to keep in mind that not everyone has spent like 90% of their lives trying to lose weight, as I have. I guess if you've literally never been on a diet in your life then maybe you actually don't know how all this works. Actually, I'm about fully convinced that nobody knows how any of this works even doctors and nutritionists and people who make up these diets for a living. Nobody! I mean, you do everything "right" and you follow a plan exactly and it's honestly a crap shoot whether or not you'll see results in any given week. Especially if you are a woman. God knows what your body might decide to do. You think you worked hard? I'm going to stubbornly hold on to every single pound you've tried to beat off your body...just cause! Or it's time for your period. Or you ate too much salt. Or the moon is waxing. Or waning. Or whatever the Hell. NO ONE KNOWS.

People act like they know. They pretend like they know. Maybe they know because it worked for them that exact moment they tried it. Maybe if they tried it again today, it wouldn't work anymore. Perhaps five years ago you could figure out how many Snickers bars would comprise your entire Points Plus balance for the day, eat just those, and lose weight. Perhaps you never had to exercise before and now you have to, Perhaps you DO follow to the letter every single thing that book you read says and you still stay at exactly the same weight for two years.

You gotta figure out what works for you.

Probably the best thing? Would be just to love yourself no matter how much cellulite you have. Or what the scale says. Or how long it's taking you.

I'm working on that too.

OMG all of this! I am still following WW though because it i dont I eat 1000s of calories of crap instead of focusing on good healthy food. But I am learning that I have to focus on what works for me and be patient when I am not "perfect" ( or even if I am) and I dont lose much. I've been stalled in the same ten pounds for about four months now. Before I would have given up and gained it all back.
Im working on the loving myself thing too. Its not easy- but I have to learn to love myself enough to take better care of myself.

I'm a creepy stranger who has said that exact same thing at least eleventy-dozen times, and then hates the people who says them too. I've tried everything & I'm convinced my body is more bi-polar than my mind is.

Just stopping by to say that I would totally come to your Friendgiving and also that I love you and your Snickers bars and 500 points worth of free fruits. If you could write your next book about a diet with those 2 things, I would totally love that too.

Dude... For being such a major issue that the majority of people STRUGGLE with, how is it that we still feel like we must be the only ones? I was thinking about this the other day as fat shaming was going on all over the blessed internet. We are so flippin' progressive about somethings and other things- not so much.
I'm in your boat, it's is DANG hard and most things don't work. Plateaus seem to leach on to me as if my life depended on it... And you nailed it- healthy is key. And loving ourselves. Which seems so peaceful and zen and great until idiots get all fat-shamy again and then, well... But yeah... For some people it's really easy. And on the internet I think some people exaggerate their progress to make themselves feel motivated and then fail and feel worse.