I'm just kidding, but that was my rule.

A few months ago I had lunch with my sister and my cousin in Raleigh. My cousin is one of those super amazing running people and she talked about her races in a way that made me think maybe I could do one too. She mentioned an average pace that you have to be able to keep for one of the Disney races and a little wheel turned in my head and I thought, "I'm already faster than that".

I thought about it all the way home from Raleigh and that night I registered myself for a half-marathon. I registered Jonathan too. That conversation went like this:

"Hey, you want to do a half-marathon with me?"

He's pretty easy to get along with.

I downloaded a training plan to my phone and started following it. I didn't tell anyone and I guess that's the weirdest part.

At first I didn't tell anyone because I was afraid I would fail. I knew once I signed up there was no way in Hell I wouldn't show up, but I really didn't know if I would be able to do that many miles in the time allotted, which was four hours. Four hours seemed like a tremendous amount of time, it's half a work-day (for normal people, my work days never seem to last only eight hours) but I thought, "What if my knees hurt? What if I can't keep going? What if I fall down?" Falling down is a big possibility with me, seriously. I'm super clumsy.

I was also worried about coming in last. Now it seems silly because I know someone did come in last and that person still did the exact same number of miles that I did, but at the beginning I let my competitive nature get the best of me. I didn't want to be the last person.

I also didn't share because I didn't do it for you. General you, not like you Becky, specifically or anything. I did it for me and only me and I kind of didn't want to share it with anyone else (except Jonathan).

Also, even though I've lost the weight and exercise every day and am physically able to do things that I was previously not able to do, I still struggle every day to see myself for who I actually am.

I also didn't say anything because of this. 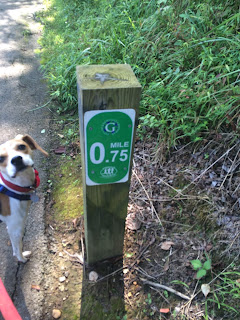 This mile marker is along a greenway in South Knoxville, Tennessee. When I decided I was going to get healthy and change my life I started walking here. The very first day I was so full of confidence and as I walked down that trail I was absolutely positive I was KILLING IT. I spotted the trail marker ahead and was positive that when I got to the point there it would say I had walked at least three miles.

Not even one mile.

I was still sure that I was doing great and that the trail markers were just somehow completely wrong and I was going to lose 100lbs in the first month and be a TOTAL SUCCESS SO THERE.

I made it back to my car and I had gone 1.5 miles total. I was completely winded too.

I went back and kept going back and eventually made it past that sign. Unfortunately right after that sign was a very big, very steep East Tennessee hill.

I couldn't make it up that hill. Not for a very long time.

Training was hard. I don't love running the way I love Zumba. Some days it was a struggle to stick with the plan. Some days I was just so tired. Also, even in the Winter it is sometimes really freaking hot in Eastern North Carolina. None of it was easy. I thought about quitting a few times, including about two weeks ago when I ran eight miles and felt like crap when I was done.

I don't quit things though (especially things I paid for. Heh) and I figured worst case scenario I could at least FINISH. I wasn't really going to die or anything.

I signed us up for the slowest possible corral. The 4 hour finishers. About three months ago I optimistically thought perhaps we could finish in 3 and 1/2 hours. I wouldn't win, not anything, but I felt like that was okay. That finishing could be my win, even if I didn't finish in 3 and 1/2 hours. That just getting to the point that I would even sign up for such a thing was such a vast improvement from how things used to be. That I am actually really okay with not winning, I really mean it.

It was a good day. It was a beautiful morning, despite the wind and cold. Our corral was a hoot, everyone was in a great mood and laughing, dancing, and singing. I realized that everyone around me also knew there was no way they could win, but they were all here for the experience and it was going to be an amazing one.

I felt great. I could breathe. The hills were torture, but I expected them. I kept going even when I felt like not going. I stopped at every single water stop. In honor of my cousin who unknowingly encouraged me to sign up, I wore a Detroit Tigers shirt (she's originally from there) and so many people yelled to me about it (all good yelling, there are apparently a lot of Tigers fans in North Carolina). It was all great until about Mile 9 when I got a very sharp, very crappy pain in my right knee. That slowed me down quite a bit, but I was determined I was going to finish no matter what.

When I got to the final mile there were people shouting, "Two turns! Two turns and then you are done!" As soon as we saw the finish line we took off. I passed a ton of people because I was just SO EXCITED to be done. We finished in 2 hours, fifty-nine minutes, and 9 seconds. (But who's counting, right?) The race photos show my ponytail flying behind me and the biggest smile ever on my face.

What they don't show, because I was wearing sunglasses, are the tears in my eyes as I saw the finish line. The 13.1 was my .75. My unattainable goal.

He didn't say that yesterday, but the pictures show the pair of us, smiling proudly with our medals.

I will never forget how yesterday felt.

Congratulations, you did awesome.