Nothing will keep you down either, Jaden Smith.

Last night? I had tickets to an advance screening of The Karate Kid. For free, even.

So me and about 279 other people (again not kidding) jammed ourselves into the Regal Riveria, but not before I had a hearty laugh at the one, single, lone, solitary guy in line with the 100 women who were waiting to see the Sex and The City movie. Poor guy really, REALLY looked like he'd rather be in our line. For serious.

They waved that wand-thingie over us to make sure no one had any recording devices. They even looked in my purse and looked at my cell phone. In fact, they announced that if anyone so much as OPENED a cell phone they would be escorted out. The crowd cheered.

Then (well, after about 300 previews), the movie started.

And I? Was. Riveted.

To be fair, 1984's version of The Karate Kid is in my top five movies of all time list. I had my first serious crush on this bad boy right here: 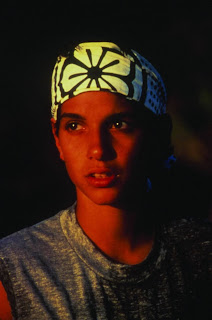 I mean, how could you not? Am I right? He could kick butt and take names AND he dated a girl who looked like her thighs could CRUSH HIM. And he thought she was totally hot! What's not to love?

Thus, I feel a bit disloyal saying this but seriously? The 2010 version was as good or better than the 1984 version. For serious.

The storyline is similar, but updated. There were moments when I whispered to my kids, "SWEEP THE LEG!" and "WAX ON, WAX OFF!" just because I knew what was going to happen (there was no waxing on or off, save the one time Mr. Han was waxing his vehicle, just so you know that I didn't spoil it for you). It was so well done. The imagery was amazing. The scenery was amazing. I don't think I breathed during the entire scene with the snake. Holy mother of Cats, it was awesome. It was AWESOME.

I cried a few times. I laughed MANY times. I literally cheered at the end (and during the tournament...several times). I mean, look at this kid: 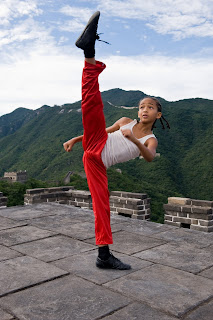 Amazing. His name is Dre Parker in the movie.

I don't know if he's actually twelve, but he was perfect as a twelve year-old boy. He was an amazing actor. Amazing. I don't have a crush on him, like I did my boy Ralph, but good Lord y'all, he was amazing. And everyone already knows Jackie Chan is amazing so that goes without being said. OH! And the chick playing Dre's mom? She was AWESOME. I loved that they gave the single mom character more screen time in this version. I loved her.

When we left the theater I looked at the time and was floored that we had been in there over two hours. It seemed like two minutes because I WAS RIVETED.

I said to the kids, "I would seriously pay green money to see that. Repeatedly." And considering what a cheapass I am and how much movie tickets cost? That's saying a lot.

I'm so glad that you liked it. Our TKD school is going (in uniform) together opening weekend.
I heard that Jada & Will bought the rights to the movie, just so their son could star in it. I'm glad that he did the movie justice!!

I guess I'll give it a shot since you loved it so much. I just wish Hollywood could come up with some original ideas instead of remaking all the classics.

When Bubba first watched the original Karate Kid, he came running out of his room after Danny(?) won the tournament with the crane move. Bubba was on top of the world and he actually had tears in his eyes he was so excited. And that is a BIG reason why I love the original so much.

You've convinced me. Taking my guys along when it's released in Australia...

Yay! I'm glad you liked it so much. Now I'm excited to see it!

My husband and I can't wait to take the kids to see it, we're super excited about it too. Glad you liked it!

I think Jaden Smith is around 12... he was 7 when he did The Pursuit of Happyness with his dad [Fresh Prince himself]

I loved the original Karate Kid (well, all of them really). And I am SO excited about seeing this one, it looks awesome.

Loved that boy in the "Pursuit of Happyness". I'm sure he's fabulous in this too.

Thanks for the recommend... without it, I likely wouldn't have bothered at all. But now? I'll rent it when it comes to DVD. Cuz I? Am likely cheaper than you.

This is wonderful blog. I love it.