Okay, seriously? Since I've moved into my house about 1.5 years ago, I've done things like this: 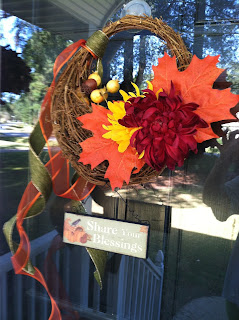 Note the excessive use of curling ribbon. 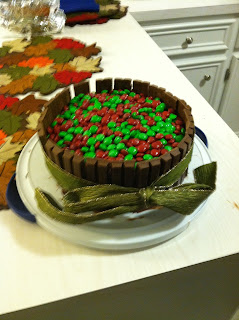 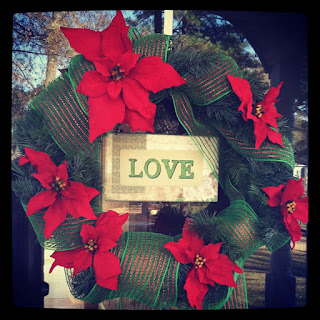 Apparently I have a thing for this curling mesh ribbon stuff. I don't know how this happened.

I've also don't know how any of this happened: 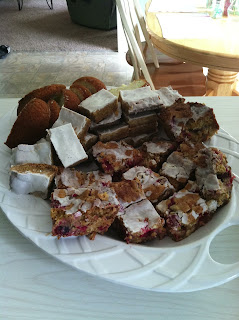 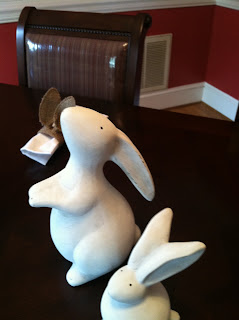 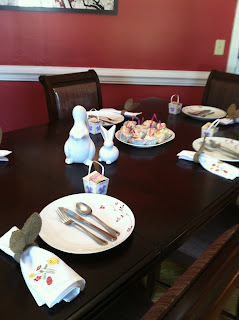 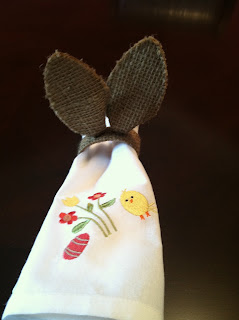 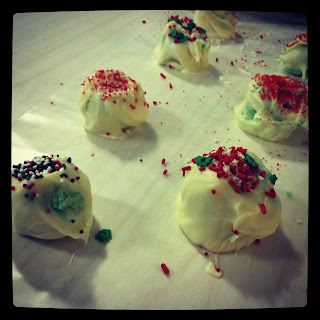 Seriously. I used decorative treat boxes. Not ironically either, they actually had treats in them.

You may be wondering why this is so surprising/unusual/strange/whatever, If so, please keep in mind that about three years ago we ate Thanksgiving dinner off of plates that were still wet from the dishwasher. I had on pajamas and my husband, if I recall correctly, was wearing boxer shorts and a sweatshirt. I didn't even have a turkey roasting pan. Not then.

My past Halloween decorations have consisted of a turned-off porch light. We didn't have a mantle so I hung stockings off the television stand. I have been kindly chastised by friends for not making a big enough deal about things like birthdays and holidays.

I don't even know what this is. The only thing I can figure is that I've been seduced by the evil mistress known as Pinterest.  It's the Pinterest Effect. It makes me believe things I've never believed before. I change one thing wondering if it will change everything in the future.

It started so innocently. I was like, "Oh hey, what's this? This is cool" and immediately went to "MUST! PIN! ALL! THE! THINGS!" Immediately. Why? I don't know other than it was fun and there were a lot of cute things there. Escapism at it's finest, and if you know anything about my day-to-day life, you will understand why I sometimes feel a very strong need to escape.

Then, almost as quickly, it became, "Hey! Why don't I try these things?" Just like that. Never mind that I can't draw a stick figure with a ruler. Never mind that I routinely cut myself with the scissors that I use to clip coupons out of the Sunday paper. Never mind that this one time I volunteered to teach Bible School and somehow got stuck with the 4 year-old group and I decorated my classroom to look like the flames of Hell complete with tons of red, yellow, and orange crepe paper strings over the actual doorway because I think the theme was something scary like that and I really didn't know what else to do. My crafts frighten small children. They are not inspiring.

That didn't stop me from spending many an afternoon with my hot glue gun, copious amounts of Modpodge, chocolate melting wafers in various colors, and my dreams. I had this house now and thousands upon thousands of pictures of what other people were doing in their houses. I was inadequate. Woefully.

I'm still inadequate, frankly, although I sometimes struggle with when exactly this all became a competition to me. I get that I am ridiculously competitive. I hate it about myself, but I truly am. It's been going on pretty much my whole life. Maybe the whole middle child thing, I don't know. I just know that there are people, people in actual real life, who spend every day writing about all the festive crap they are doing with their children that they have no trouble conceiving and who aren't fifteen years old and over all your nonsense. There are people who bedazzled the wreaths on their front doors to absolute epic proportions. There are people who can, on a moments notice, whip up fourteen different varieties of chia-tea based desserts which are somehow also gluten-free and serve them atop lace tablecloths on colorful plates that were handcrafted by local artists. Probably using the tears of angels. I'm not sure.

I am not one of those people.

God help me, sometimes I really want to be. Even though I know it's not real.

Sometimes, when clients are angry and everyone is having a bad day and taking it all out on me, I take it personally. I can't help it. I don't want to be this way, and I tell myself all the time that they aren't really mad at me. Sometimes if I get a negative comment or ugly review, I take it personally. Sometimes, I feel like I'm the only person in the world who has a marriage that can be described as "challenging". Often, I feel like I'm on an island. Not a happy, warm, beautiful tropical island either.

I guess it's understandable that sometimes I wish that the pretty, shiny, happy, unicorn-farts could be every single day. Not just an occasional photo-op.

I think crafts on Pinterest are the devil! Mostly it's the ideas for your kids, it makes me feel like I'm a terrible parent. Or the little girls hair-dos, my daughter's hair looks limp and tangled all the time, because I'm a bad mom that doesn't wake up 30 minutes early to do her hair every morning. I also don't hand make treats for my kids' classes and stupid presents for their teachers on teacher appreciation day. Pinterest makes me feel like I'm failing at being parent.....so, if you couldn't tell, I just use it to look at awesome tattoos. LOL

I totally get you. I feel much the same that you do. yesterday was my 15th anniversary and since you can't find manly crystal and clock stuff I did a prank bag that he didn't understand, we scrimmaged my sons all star teams for the anniversary activity and he was on his phone all the other parts of the evening. And this is typical of milestones like that. challenging is what I have too. I recently watched a Mormon clip about an older couple, both with health problems. Although tear jerking to watch, the point was that marriage is the perfect arena for us imperfect people to practice serving and making someone else's needs more important than our own. So, here's to that perfect opportunity.

OMG the Pinterest Effect! Love it! I'm slowly finding myself walking down that twisted road... And, inevitably, my efforts end in failure. Oh, well.