I've been about the same weight for a year now. It's still weird.

Like, last night? I went to Krispy Kreme. I don't eat Krispy Kreme anymore, but the other people I live with do and I love them a lot. My daughter picked out a dozen doughnuts that she and her dad and her brother would like. It was totally fine and the cashier guy was super nice and then I realized something:

No one cares if I buy doughnuts now.

Okay, here's the thing that I actually totally really do understand: probably nobody cared before either. I always thought people cared or were judging me or whatever. I worked at McDonalds in high school and the first few years of college and I literally never remember thinking, "Whoa, that chick doesn't need six Big Macs". I was just like, "Here you go, have a great day!" and then moving on to the next order (or flirting with grill cooks). I didn't give a crap and probably no one ever did about me either.

So that's weird. It's not all about me. Who knew?

A few months ago I was talking to someone and they said that someone they knew had lost eighty pounds with some diet drug and I immediately said, "I wish I could lose eighty pounds!"

I don't have eighty pounds to lose. If I lost eighty pounds I would be dead or at least in some sort of hospitalization program with a feeding tube up my nose. My immediate thought though was "I should try this medication and lose eighty pounds!"

The truth is, I cannot wrap my brain around "maintenance". I've been in "lose" mode for so long that this year didn't really change it.

The further truth is, my brain is extremely messed up with all of this. This is not just my opinion, my therapist agrees and I'm pretty sure she had to go to school for a really long time to get to say so.

I got this book which was one those "For Dummies" books because that's just about the level I'm on with this crap and I haven't even cracked the cover yet. It's not helping me via osmosis. Strange.

I have not yet come to terms with being average. It's all I ever wanted and it's still really, really weird.

This is the other thing (yes, I know this whole post is a disjointed mess, I'm just letting my thoughts come out), and this is the hardest thing. One of the biggest reasons that I'm absolutely terrified about regaining the weight is that this is literally the only thing I've ever done that people have been proud of.

No seriously. Write a book? Yeah, that's nice. Graduate college with straight A's while working full-time and raising two kids? Yeah, no one cares. Two kids in college that they are paying for themselves? Whatever, no one cares once they are old enough to drive. Holds down a three jobs? Pass the salt.

I mean, all of those things to me are bigger and brighter and so much more of who I am than what the scale says. But there is no praise in any of that. It's super tough for women because there are so very few things we can do to garner praise. I also can't do the other thing that women get praised for, which is have children. I remember when people used to call Michelle Duggar "Mother of the Century" just based on the quantity of children she had, when the real truth was she passed those kids off to her older daughters to raise as soon as she was able, she was unable to tell a reporter literally anything about her kids beyond what they were like as infants, and lets not forget her son was molesting her daughters, she knew, and she didn't protect them. I'm not saying I'm a perfect mother, by any means, all I'm saying is number of children is also not a good qualifier. Basically, as a woman, weight loss is the only chance I have to be worthy of praise.

It's ridiculous isn't it? I giggled to myself a little bit when I typed that last line because that's just so backward and stupid and wrong. But I also live in a country where you can post a news story online about a female CEO who created 1000's of jobs for her company and 90% of the comments on said story will be some version of "she's a fat ass" or "she's a bitch". If a man did the same thing he'd he lauded as a hero and no one, not one person, would comment in what he was wearing for the promotional photograph or if his ass looked big in his Hagar slacks.

My therapist says that people can't relate to a lot of things I've done, but almost everyone can relate to weight struggles, so that's why people would comment on such things. I get that, honestly. It doesn't make it suck less though. I have tried many times to put my real feelings, my real thoughts, and my real struggles out into the world and...I honestly just can't. I am not eloquent enough. I'm not talented enough. It's so much more than I'm able to write about.

There's no good way to end this post, so I'll just share a picture of my dog. She doesn't care how much I weigh, she just loves me. I'm sure there is a deeper meaning there, but I'll let you work that out. 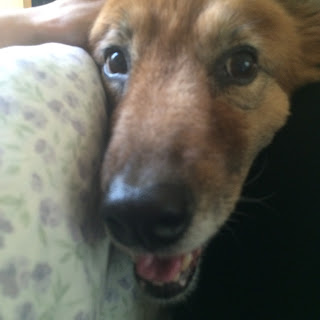 I sometimes think I'm resisting losing weight because I hate the attention and the praise. Every single person who mentions it makes me feel like they may as well walk up and say "you were so much worse before".

I agree with you and think it sucks, however you are wrong about one thing. You have raised 2 amazing humans and have a hell of a lot of grit. Thank you for being someone I can look up to.

I agree so much with so much of this and Jessica's comment as well. I have lost a lot of weight before only to regain it. I remember one time my mom telling me after I lost the weight telling me how my stepdad commented on me smiling more and she told him, "yep, I have my Jana back." I don't think I smiled more, I actually was in the beginning of a nasty drug addiction that would lead to treatment 2 years later and also weight gain. I wasn't happier. They just wanted me to be thin or some weird shit. So, after 75 days of inpatient treatment and 4 months in a half way house, I couldn't even be proud of myself for that because I gained 100 pounds and all I could think about was that comment. What a disappointment I must be. It's too much pressure and I think sometimes I resist losing it because what if I gain it back? Can I let everyone down again?? Can I give Jana "back" to them, to just take her away? Which I do know now was a ridiculous comment to begin with. She always had ME. I started Weight Watchers a couple years ago and lost 50 pounds. Everyone started noticing and commenting how proud and happy they were. I couldn't do it anymore. I don't want anyone to notice it or me. I do want to be healthy. It's such a conundrum.