I don't particularly love Mothers Day one way or the other. I love being a mother. I really, really do. I'm keenly aware that there are very few things in this world that I'm particularly good at, and despite all odds, being a mother seems to be one of those things. Maybe because I love it. I love it even when it's really hard and bad and my son says things like, "Explain God in four sentences or less." and my daughter asks questions like, "What's fellatio?". Even then. I'd much rather be in the world, simply because they are in it.

I thought I would do a post about this yesterday, but I didn't.

Instead, I went to church with the small people in my life and listened as the preacher told me I should be praying for their future spouses. I laughed with my son when he said that obviously someones prayers weren't answered when it came to me. We turned our compost and bought flowers for the front of our house. We ate cereal for dinner because I just didn't feel like cooking and the dishes are still in the sink for me to wash today. Just cause.

Mostly, though, I thought about things.

I thought about a friend of mine who is unbelievably precious to me. I thought about how she gave birth to her little son much, much too early. She was only 20 weeks pregnant and he lived only a few hours. I thought about how she must feel and how dreadful and screamy and painful it must be...to be a mother but not have a child you can hold in your arms. I wondered how you prove such a thing. You can insist and you can swear, but people want proof. They want your proof of life. Your arms are empty and your heart is full, but people aren't kind. They only want what you can't give them. What you can't even show them.

I am a mother.

She is a mother, the same as me. Her heart is worn for the wear, but she is, just as I am, a mother. I screamed at God about her, because I just don't understand why. (He's still cool with me, though. He knows how I do)

I thought about another friend of mine, who adopted her beautiful child. How now, even now in 2010, people still don't get that this child didn't grow in her belly, but grew in her heart. That just because the baby didn't come out of her hoo-ha or a hole in side (like the pair of mine did) that makes her no less of a mother.

She is a mother.

There are women in my life who, even though they aren't old enough to be my mother, have stepped up when I needed them and taken that role. They've held me when I cried and stood up for me when I needed protection. They've soothed my weary soul, they've prayed over me and praised my accomplishments. They've been there for me when I failed.

Some of them are mothers to other children. Some not. But they all filled that role for me. They nurtured me. They care for me. They protect and love me. They rejoice when I'm happy and weep for me in my sorrow.

They are all mothers.

It occurs to me that I am raising a mother. She mothers the Boy Child and I all the time; always the one to confirm we're wearing jackets, making sure teeth are brushed and dinner isn't cereal all the time. She's a protector, strong and brave. She'll be someones mother someday I think, but in reality even if she never has biological children I'm sure she will be a mother. She'll nurture, she'll love, and she'll take care of everyone in her path.

It is my honor and my joy to be counted among these women. These mothers. 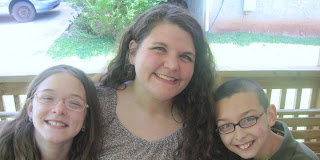 You know I'm not one for crying, but I got a tear in my eye reading this post.

You make me cry! So sweet. What a lovely post!

Thank you so much for writing this, Stephanie. My arms were empty yesterday, but I wanted to scream to everyone I knew, "But I AM a mother!" I just had to give my precious baby back, you assholes.

What a wonderful post, Stephanie! Definitely made me a little weepy (thank you raging hormones) but it was so beautful that I don't see how anyone couldn't be moved to tears.

There are all types of "mothers" out there and I hope one day, people will appreciate every single one.

You are a wonderful Mother, Sister, Daughter and most loving Neice! I am honored to be your Aunt...and Boy Child and Girl Child's Great Aunt! I cried reading this, Sometimes I don't understand it either! I Love you

I'd leave a really sweet comment if only I could see what I was typing.

Happy Mother's Day to you. And to all the Mother's out there.

that was an awesome post, Stephanie. I read on another blog that England celebrates Mothering Sunday - a day to honor those who mother and care for others,not only those who are mothers in the biological sense of the word.

You are a wonderful lady, darling. Sunday was particularly rough; dreadful and screamy and painful sum it up pretty well. Empty arms are hard most days, but that one was especially hard. Asking myself - am I mother? I was a mother once, for a few hours. But am I still a mother?

Thank you for saying I am. Lots of love to you.

Lovely post and oh so true. Thank you, as always, for sharing. Beautiful picture of you and your children.

Your post is spot on. I live and breathe a TTC community of fertility-challenged women (like me) and Mother's Day was a tough day. I'm blessed to have been given one miracle baby. But so many of my dear, dear friends were either given their babies, only to have them snatched away too soon, or haven't yet had the chance to see the baby in their heart become the baby in their arms. Thanks for your post. It was very, very kind.

I've had this post opened up on my internet browser since yesterday, trying to think of a good comment to leave. Your post made me cry for real. I've been trying to have a baby for a while and it's hard going through another Mother's Day without one. I feel like no one understands, so thanks for this post because it really helped me feel not so alone.

Being a mother is really about being willing to allow another to take up residence in your heart. Love how you spoke that truth. Blessings to you.

i wasnt expecting cry ... shouldve changed into my glasses instead of my contacts ... lol! beautyful post love!