I never do this, right? I started the review blog especially so I wouldn't do things like this. But I'm going there. Yes, I am.

A couple of years ago (oh my God, has it been that long?) I got an email from a man named Ross Cavins that I darn near deleted before reading. I think the subject line was something like "I found your blog" and the first line of the email was, if I remember correctly:

"I think you might be the person I'm looking for"

So, because I had gotten several marriage proposals, hook-up suggestions and a very generous offer to braid my hair all via email and all around that time frame? I was kind of assuming that would email would be something similar. On a related note? A lot of men are freaks.

Anyway, I read it. I don't remember why I, but I did. And it wasn't an offer of marriage or nookie or even a pony-tail holder. Ross was starting a website and wanted me to write for it.

Ross is a cool guy. He wrote a very funny book. 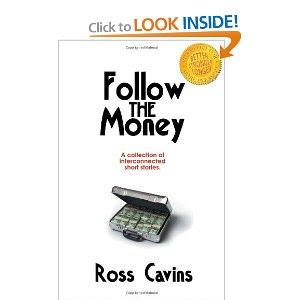 Follow the Money is a collection of interconnected short stories. If it wasn't fiction, I would swear I knew about 80% of the people in this book, or at least someone just like them (Ross is from North Carolina, but I didn't know him when I lived there. I promise). It's a page turner - every time I thought I figured out where it was going it went somewhere totally unexpected.

It's also very, very funny. I literally laughed out loud several times (much to this dismay of those around me). There is a chapter entitled "Toe Thumb". Seriously.

Ross is master of weaving a set of stories together. As a writer, I literally have no idea how he did it, but he gets a gold star for creativity. I don't think anyone else could have made Peanut Butter Cap'n Crunch, a light-up Santa, a stripper, and a television evangelist work. But he did. The book really does read like a novel and it was so satisfying that I literally had a huge grin on my face when I finished the final chapter.

Only one small warning, for the faint of heart among us. This is a grown-up book. Lots of sex, drinking (sometimes while driving, which we here at Stephanie Snowe: The Blog! do not condone), and language. It works well with the story, just wanted to make clear it's not one for the kiddies. My daughter (age 12) looked longingly at it (as she does every new book I bring into the house) and I told her, "When you're a little older".

Ross is re-releasing the book next week and it's available on Amazon right this very second. You can get a signed copy by going here.
Be sure to go by his website and tell him I say "Oh Hai!". Then tell him you like him too. Because you will.
Posted by Steph at 3:26 AM

LOL - generous offer to braid your hair! HA! I will check this book out because I laughed out loud when I read your book so if you laughed at this one, I know I will too!