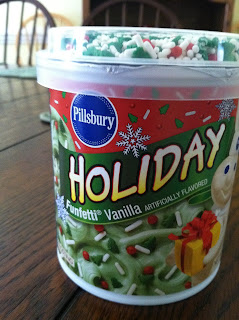 So this morning? I bought some frosting.

Okay, I was just going to buy water and Diet Pepsi. I didn't go to the store specifically to purchase frosting. I just happened to be at the store and I saw a big old display of frosting for a mere $0.89 per container and you know how I am so into saving money, right? So I took four. I had to restrain myself from taking more. I might go back later.

It's "Holiday" frosting, which explains the cheapness. In this Girl's World, "holiday" can mean just about anything though. Remember I used to make up things like, "It's International Fraternal Twins day!" just so I could make cake. Cake is delicious. I don't really like sprinkles (gasp), but I do like vanilla frosting, even if it's tinted green. Hey, we could always celebrate, "Eat Green Cake day!" or some such whatever. I don't care. It's cake.

At the register, the cashier looked at the purchases and remarked on nearly everything I bought (which is fine, really). When she came to the frosting she said,

"Oh! This is the frosting I need! It's almost my holiday!"

Well, it's February (still? OMG). But thinking she was probably a kindred, cake-loving soul I said, "It's $0.89 so every day can be a holiday!"

She looked at me like I was smoking twelve tons of crack, right there in the Food Lion.

"Oh that's great," I said. Because, actually? I don't care. I was still thinking about cake.

The bagger, who appeared to be about twenty-five said, and I swear to God I'm not making this up, "Where do Irish people come from?"

"Where do Irish people come from?" the cashier repeated. "I'm from Orlando."

"Are we being filmed?" I asked very seriously.

They both looked at me like I had lighted the crack pipe, began to wave it about, and belted out my very own special version of "Let's stay together". (Which, let's face it, would be pretty awesome)

"Other Irish people are from Ireland," she told him, choosing perhaps wisely to not respond to my question. "But some are from Orlando."

"Is that in Florida?" he seriously, I'm not even kidding, asked.

"The state? Or the city?" this person who actually was from Florida and presumably would know what it meant asked.

The bagger chuckled. "You are so dumb."


I think it's contagious bagger. I really do.


I love every single thing about all of this. I hope that's okay.
Posted by Steph at 7:13 AM

it's more than ok to love that conversation. "are we being filmed?" indeed.

Whew. You escaped from the twilight zone of stupidity. It's contagious you know... be glad you escaped with your life!

ha! this made my day... people are so goofy!

Hahahaha! I love every part of this too! It reminds me of the movie "Idiocracy".

the snowflakes and the red didn't pass a hint that it was for CHRISTMAS? How do you run across these people, seriously?

You. Are. Hilarious. I just laughed into my coffee cup. Awesome.

This is why I loved your book. Laugh out loud funny!