As I've mentioned before, the Boy and the Girl are pretty much the most hilarious people alive. They are also amazingly talented and I'm not just saying that because I am their mother. They can do such cool, fun things and one of the things they do is create comic books.

Here is the newest one, inexplicably called "Sardines". Enjoy! (And please enlarge when necessary as these drawings are painfully funny) 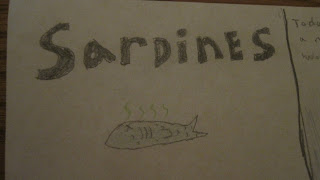 Sardines! For some reason! 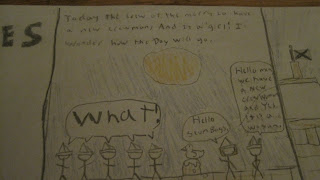 Today, the crew of the Merry Lo have a new crewman. And it's a girl! I wonder how this day will go?
Captain: Hello men. We have a new crew woman and yeah. It is a woman!
Crew men: WHAT?!?!
Woman: Hello scum bags! 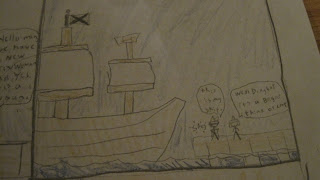 Captain: This is my ship.
Woman: Well, dingbat it's a big thing of crap.
Captain: *sigh* 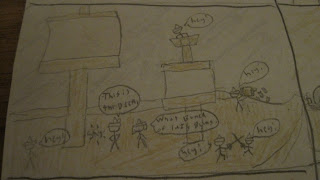 Captain: This is the deck.
Woman: What a bunch of lazy bums!
Various crew men: HEY!
Captain: *sigh* 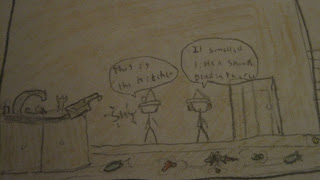 Captain: This is the kitchen.
Woman: It smells like a skunk died in there.
Captain: *sigh* 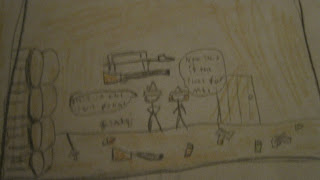 Captain: This is the gun room.
Woman: Now this is the place for me.
Captain: *sigh* 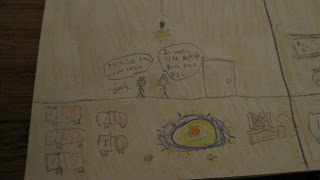 Captain: This is the crew room.
Woman: It smells like a pig's bum and pee.
Captain: *sigh* 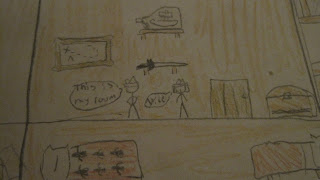 Captain: This is my room.
Woman: Nice. 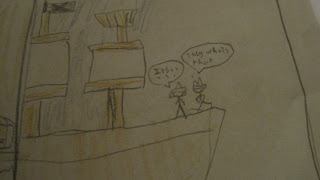 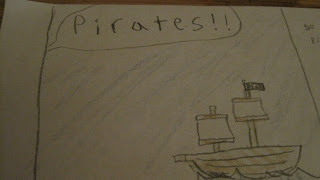 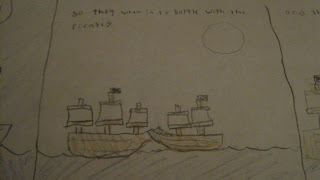 So they went into battle with the pirates. 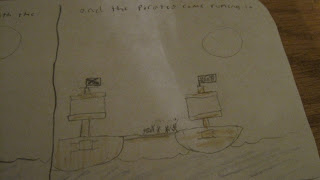 And the pirates came running in. 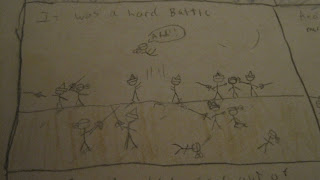 It was a hard battle.
Random Pirate: AHH!!! 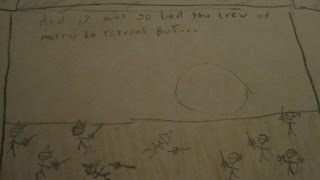 And it was so bad the crew of Merry Lo retreated but... 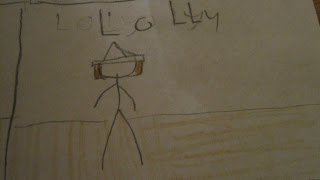 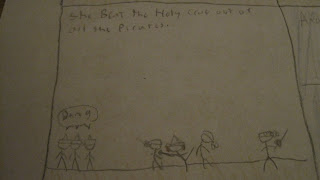 She beat the holy crap out of the pirates.
Random Crew Men: DANG!

(Please, for the love of God and all that is holy, enlarge this picture and look at Lolly doing a high kick on the pirates. I nearly lost my crap while looking at this. PLEASE. DO IT.) 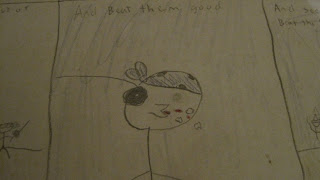 And beat them good!

(Please note, the pirate is losing teeth and lots of blood. Cause we are all about being authentic up in here.) 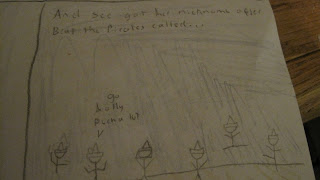 And she got her nickname after beating the pirates called...
Captain: Go Lolly Punch-a-lot!

I know I'm their momma and I automatically think everything they do is hilarious, but seriously this is INSANELY HILARIOUS to me for some reason.

Stay tuned for further installments. EXTREMELY HILARIOUS INSTALLMENTS.
Posted by Steph at 1:31 AM

OK, when Lolly is doing the high kick, and all the crewman are watching and saying "Dang" in unison?

VERY COOL!!!!! And Very Hilarious!!! Does one draw pics & the other write the story?

SHIVER ME TIMBERS THAT WAS A HOOT!!! Great job Girl and Boy Childs!!

I laughed so loud a coworker had to come in to check on me.

OH MY G-D!! I almost peed my pants at the high kick!

I laughed out loud at "hello scum bags"!
I love the little bird sitting on the post in that picture, too. Nice detail!

Your kids are awesome.